‘What’s a journalist?’ – The meeting in Tübingen

– The understanding media meeting in Tübingen –

Experts on media education from nine European community radio stations and associations came together at Freies Radio Wüste Welle in Tübingen on February, 18th and 19th to talk about media and media literacy training. A fruitful and informative exchange on media training tools and approaches ensued and set the stage for a promising learning partnership in the coming 18 months… What is media literacy and in what way are it’s basic principles incorporated into the advancement work of German community radio stations in general and especially  of Wüste Welle Tübingen? The meeting provided some input on theory and practice of media training and was designed to leave lots of room for discussion and exchange. Ronald Senft, the training co-ordinator for the alternative educational association of Bildungszentrum Bürgermedien (BZBM) talked about media education in Germany and the work of the BZBM. He focussed on the consolidation of cross-border training co-operation between media educators in different states. The BZBM is supporting media training in community media in four south-western German states including Baden-Württemberg. Senft had some exemplary numbers to illustrate the way means for education are distributed in the sector. 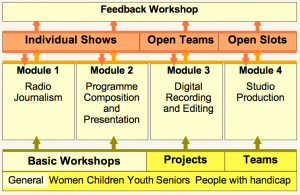 Carsten Girke, the main advancement executive for Freies Radio Wüste Welle, introduced us to the educational scheme of the station. His focus in the first part was on how it came to be and in which way a changing target group, created by the Bologna process, significantly altered the entire system. The new system has a highly modular structure, allowing participants with varying time budgets to take part in media workshops at the station.

We went through parts of the practical training done at Wüste Welle with some of the tools they use to teach the basics of journalism and programme presentation. Actually doing a brainstorming on the question “what are a journalists duties and responsibilities” with a group of veteran citizen journalist turned out to be an interesting and refreshing idea. On the second day, the meeting was focussed on educational work aside the basic radio workshops. Matzel Xander, a Wüste Welle project manager and Silke Bauer, programme co-ordinator and youth development worker of Wüste Welle, talked about advancement work with specific target groups. Those range from women to kids to people with and without handicaps. The main focus of the discussion was on methods to find, recruit and motivate these groups for media work. Various media projects on the local up to the European level come into play here as well. At the moment, Wüste Welle is trying to reenforce intergenerational media work at the station, still tip-toeing around square one.

Tuesday afternoon was open for discussions on various topics including the use of online-tools and social media applications in radio- and educational work, the very pratical approach to media literacy that Tübingen is taking and the basics of journalism in an over-informed European society. We like to think that this meeting set a great tone for the coming talks and conferences and are looking forward to future co-operation in the field of community media education. For everyone, who wants to know a little more about the host station of Wüste Welle, here’s a short film on it’s activities in German language with english subtitles. And for a clearer picture of the meeting – here are some photos: